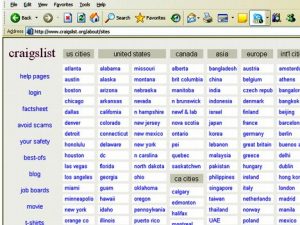 The online classifieds marketplace Craigslist now has a feature to allow users to select if they accept cryptocurrency payments on Friday, according to TechSpot.

The users of the site were previously able to point out in the test of their posts if they accept bitcoin or other cryptocurrencies, but now the site has a more direct way to say that with a check-off box that reads: “cryptocurrency ok.”

The posts were actually first pointed out on Reddit on Dec. 7 that the box included a note but left details about which cryptocurrency up to the two parties.

The feature seems to be open-ended which leaves the choice of which and the manner of the transaction up to buyer and seller negotiations.

Users were not sure when the feature was added but the news spread across social media on Thursday and Craigslist has so far not publicly commented on the issue.

Craigslist users can also sift through results for if a seller accepts cryptocurrency or not, so now you could buy your used cars or antiques with bitcoin.

The long-running classifieds site was founded in 1995 but still maintains more than 80 million ads monthly (a figure that functions for reports and renewals).

Craigslist if the 16th most popular website according to Alexa, ranking it 106th across the globe.

The transactions are not able to be revoked once they are confirmed on their respective blockchains for users considering the option, so it’s inevitable that someone may get taken advantage of by scammers if they are facing fraudulent sellers or don’t know how to use the digital currencies.

The news is a big win for sellers looking to accept new forms of payment since there is an incidental risk involved once a transaction is confirmed by several peers and no means for counterfeit cryptocurrencies being passed off as the real thing when using well-established blockchain platforms.